The Washington Post recently ran an article concerning the dog rescue efforts occurring in Houston after Hurricane Harvey.  The images below, with photo credits, illustrate the heartwarming rescue of dogs in the Houston area during this devastating time for all.  Doug and I donated to a few organizations, this week, to help those people and animals affected in Houston by this terrible storm.  If you are able to help in any way, all donations and help, no matter how small, matter.  Our hearts go out to all those affected by this extreme tragedy. 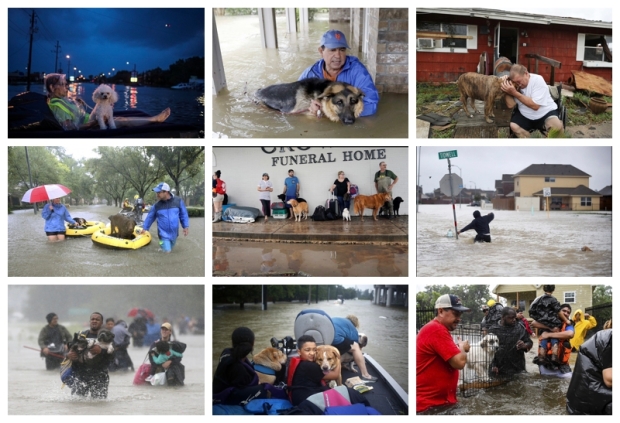 Top Right: An elderly woman and her poodle use an air mattress to float above floodwaters while waiting to be rescued on Scarsdale Boulevard in Houston. (Adrees Latif/Reuters)

Top Middle: Joe Garcia carries his dog, Heidi, from his flooded home as he is rescued in Spring, Tex. (David J. Phillip/AP)

Top Left: Steve Culver cries with his dog, Otis, as he talks about what he said was the “most terrifying event in his life” when Hurricane Harvey blew in and destroyed most of his home in Rockport, Tex.  (Joe Raedle/Getty Images)

Middle Left: Residents and pets are evacuated from their homes in Houston. (Godofredo A. Vasquez/Houston Chronicle/AP)

Middle Left: A person and a dog mover through a flooded street in Houston.  (Joe Raedle/Getty Images)

Lower Middle: A boy hugs his grandmother’s dog after being rescued from rising floodwaters in Spring, Tex.  (Luke Sharrett/Bloomberg News)

From: Dog Rescue
← Around Here: August
Why you should sleep with your dog →
No comments yet