After visiting Quebec City, a French-speaking territory, during our recent vacation, we realized that no matter what language someone speaks, everyone can relate to a dog/chien!  Many people, total strangers, came up to us to meet Victory!  Even though we do not speak French (Doug knows more French than I do), everyone can relate to a furry family member!  Many people commented to us that they loved the Ergo Performance Carrier and others wanted to take a photo of Victory in her Ergo Carrier — and they could not believe that she liked her Ergo Carrier!  For those whom we could not understand what he/she was saying to us in French, we could understand “Beau Chien!”

We rarely meet other shelties while we are out and about with Victory.  However, during our first visit to Quebec City, we met a native Quebec sheltie named, Choco, a male, tri-colored sheltie, shown below!  Victory and Choco met giving each other some sniffs and kisses, and the Ergo Carrier came in handy — otherwise, Victory would have been quite overwhelmed!  Choco’s parents were so happy to meet Victory, even though we could not understand most of what they were saying — we could discern their excitement and enthusiasm to meet our fur girl!

Additionally, shown below, is a very short iphone video of our fluffy girl in motion during our vacation! 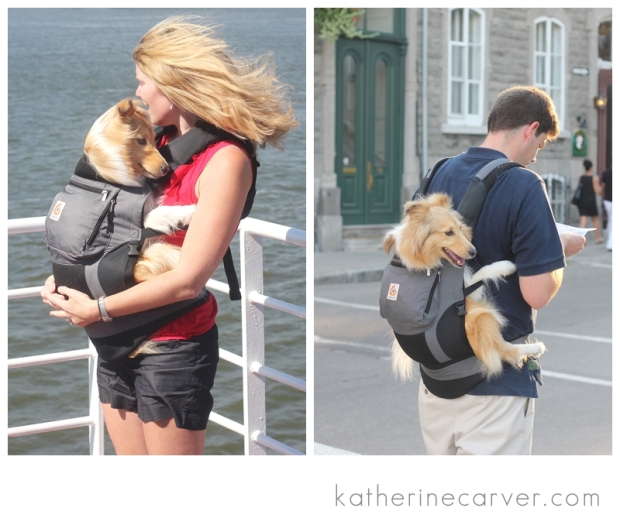