Photographer Martin Usborne is creating a new book with the Spanish hunting dog, Spanish galgo, as his subject.  This body of work focuses on the current treatment of these animals, which were historically viewed as a regal and noble breed.

You can view Martin’s current work, Where hunting dogs rest, here; and to learn more, you can view the Kickstarter video here and support this project if you are so inclined.  (Please note — even though Martin Usborne has reached his target on Kickstarter, he still hopes to raise further funds to help cover the costs of the project.)

Below is an excerpt from Martin Usborne concerning his new body of work.

“I had to make this book.

For centuries Spanish hunters have used dogs, mostly greyhounds, to hunt wild animals across the winter landscape.  In the 17th century these dogs were associated with nobility.  Nowadays, at the end of the season it is estimated that around 100.000 dogs are abandoned, considered too old or slow for next season.

Most dogs are simply left by the sides of the road or at the edges of towns but some are punished for poor performance by being hung from trees or thrown live down wells.

This book does not look directly at the pain.  The photographs show rescued dogs alongside the landscapes in which they are abandoned in a dark but hopefully beautiful light.  The work is inspired by Velazquez who painted in the same area in which these images were taken and at a time when these dogs were still considered noble.

‘Where hunting dogs rest’ is the title of the book.  Some dogs find rest in rescue centers whilst others find a different kind of rest in the Spanish landscape.” 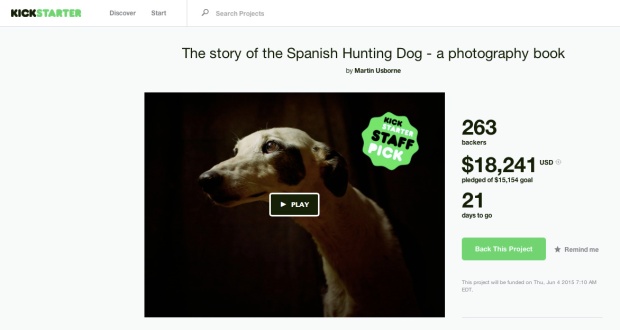 You can read previous interviews of Martin Usborne here and here.

From: Dog Related Information
← In ‘The Zone’
Victory: Photography Project — 60 →
No comments yet