Ok, this is a fun post!  Below are ten things you might not have known about us!

1. Doug and I met through mutual acquaintances shortly after I graduated from law school and took the bar exam.  Doug had already completed his graduate studies.  So, it was sort of like a blind date!  We exchanged a few e-mails before hand and spoke on the phone.  I still have our first e-mails that we wrote to each other safely tucked away!  I also have every card that Doug ever gave to me!  I am sentimental like that!  Then, we had our first date and the rest is history as they say!  This October marks our 10 year anniversary together!

2. Doug cooks 95% of all of our meals!  This is great for me — I just gather our food from the grocery store each week!  Doug is also a wonderful baker!  Each Sunday Doug makes us a nice breakfast.  Typically, he makes malted waffles; delicious crepes; or scones!  Occasionally, he makes cinnamon rolls and monkey bread!  We are huge fans of King Arthur Flour, and we took Biscuit there during our trip to Vermont last spring!

3. We usually go to bed pretty early during the week, around 9:30 p.m. — I know, we are like an old married couple!  After Victory’s final walk for the night, she usually races up the stairs and hops right into the bed (she only gets in bed on the right side of the bed) and waits for her drink of water — to help stave off the 1:00 – 2:00 a.m. request for water (which we are working on!)  We are early risers, but we do sleep in some on the weekends and little Victory is quite accommodating!

4. Each night Victory likes to lick Doug’s arm pits through his t-shirt — I know it is gross!  We think that she is attracted to Doug’s Gillette deodorant!

5. Doug and I have been getting hooked on TV series and we have been watching a fair amount of Netflix!  We just finished Season 1 of The Killing. This show is addictive!  We are also excited for new seasons of series to start on HBO and Showtime!

6. We have date night at least once a week, sometimes more!  It is nice to have some time together, and when the weather finally gets nicer, we can include little Victory as we will be able to eat outside at some restaurants!

7. Doug plans all of our vacations!  He does everything from coming up with ideas of where to go down to mapping everything out!  I just make a list and get us packed!

8. I love lists.  I always have a list going.  Doug is totally the opposite.  Somehow, he keeps everything in his head.

9. 99.99% of the time, Doug drives when we go somewhere together, which is great!  He is very good with direction, unlike me!  When Victory goes with us, she typically sits on my lap.  She gets super excited when we arrive back in the neighborhood and when the garage door opens, she is standing on all fours on my lap looking astute!

10.  We do not have iphones or smart phones.  I know, we are living in the dark ages, but we like not being connected all the time.  Each time we go out to dinner, we always see people on their phones instead of enjoying dinner.  Perhaps sometime this year we will get iphones out of necessity because they do not make our phones anymore!  But, we have been getting by just fine without having iphones!

Below is one of my favorite photos, to date, of our little Victory taken this past weekend — she is so beautiful and she is sprouting with her sheltie furs!  I told Doug that Victory is sprouting he fur coat like a Chia Pet! 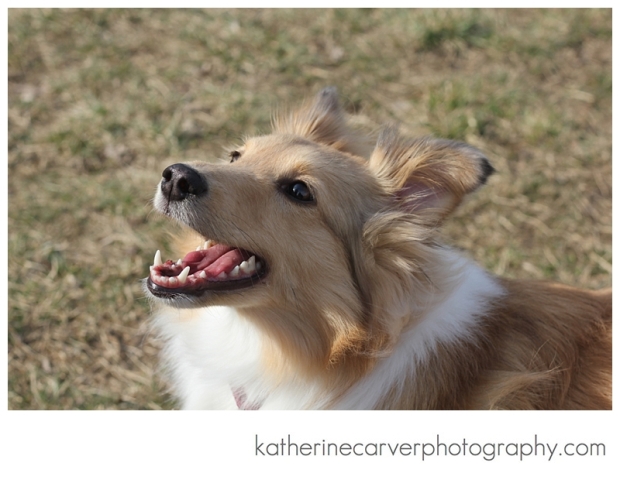