Honoring Biscuit: Remembering His Love for His Hound About

“I have found that when you are deeply troubled, there are things you get from the silent devoted companionship of a dog that you can get from no other source.” ~Doris Day

Today marks eight months since our precious Biscuit passed away.  One thing that Biscuit loved to do was take a spin in his Hound About!  Soon after we rescued Biscuit, we knew that he had issues with his legs — they were extremely fragile and he suffered from arthritis.  It was suspected per the Sheltie Haven Sheltie Rescue, Inc., the dog rescue organization where we adopted Biscuit, that he suffered from living in a puppy mill, as his rear legs were slightly deformed.  We made sure Biscuit took his daily arthritis supplements to help his condition.  As a result, Biscuit could not walk too far of a distance at a time, although he did enjoy his daily walks around the neighborhood!

I did not want Biscuit’s arthritis to stop him from going on longer walks, traveling, and sight-seeing.  As such, I looked into finding something that we could use to push Biscuit around in!  I came across the Hound About via Google searches.  When I showed Doug the Hound About, Doug, at first, told me that it was “over the top,” but he indulged me in my quest.  Since we ordered his Hound About from California (not local), Doug and I cut out newspapers to the appropriate dimensions to discern which size to get Biscuit.  So, we settled on the larger size, the blue Hound About.

Biscuit immediately fell in love with his Hound About!  Doug and I have so many wonderful memories of Biscuit in his Hound About.  Since our old house, unlike our new house, did not have a garage as it was located in the city, we kept Biscuit’s Hound About in our guest room!  We are so thankful to now have a garage for the cars and storage!  Some evenings, during the warmer months, we skipped the gym and took Biscuit for a ride around the Harbor, which he loved!  Biscuit was very smart.  Since the Hound About was too wide to fit through the front door, Doug had to take the three wheels off the carriage portion of the Hound About to enable us to get the Hound About in and out of the house!  As soon as Biscuit saw us taking out his wheels to his Hound About, he got so excited!  He barked and smiled, ear to ear, and ran out the front door, just waiting for Doug and I to quickly assemble his Hound About so he could get going on his ride!

Biscuit is pictured below in his Hound About in downtown Halifax after he went shopping with us at Lululemon and Roots among other stores (Biscuit went inside the stores with us)! 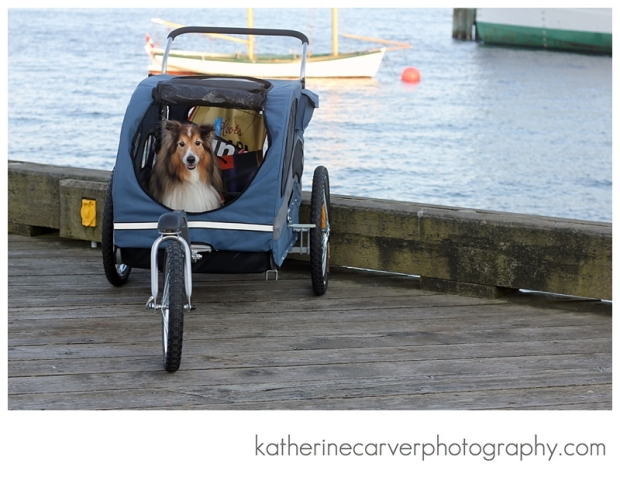