This weekend Doug and I went to the National Zoo to visit the cheetahs and pandas.  Since we met almost nine years ago, we have been regularly going to visit the National Zoo.  However, Doug and I realized that we had not been to the National Zoo since we rescued and adopted Biscuit.  (Unfortunately, furry family members are not permitted at the National Zoo).  Since the weather was so nice on Saturday, we decided to go to D.C.  Below are a few of my favorite photographs.  (It was a bit challenging photographing the cheetahs through the fence; and it was challenging photographing the pandas through the glass as the two pandas were inside their glass enclosure as it was too hot for them to be outside!)

Tian Tian, a male panda, is shown below.  We do not know the name of the cheetah shown below, other than it is a male cheetah!  As you can see in the image below, Mr. Tian Tian is enjoying a sweet potato while sitting in a sea of bamboo — his dinner!

Over the years, we have seen litters of cheetah cubs born at the National Zoo; and we saw little Tai Shan, the first panda cub born in 2005 at the National Zoo!  Mei Xiang  and Tian Tian and are the mother and father of Tai Shan.  While at the National Zoo this weekend, we heard that Tai Shan, who now lives in China may be a father soon!  There is also a baby panda cub watch on Ms. Mei Xiang — the Zoo thinks, if she is pregnant, we will know sometime in September 2013!

Even during our honeymoon to France and Israel, we visited the Jerusalem Zoo where we saw the cheetahs!  (Unfortunately, there were not any pandas at this zoo).

After the National Zoo, we walked to Georgetown and then we had a nice dinner at one of our favorite restaurants in Northern Virginia, Mike’s American!  It was a fun “date day” together!

For our anniversary this past October, I had a custom Cheetah and Panda Totem made as an anniversary gift for Doug!  Doug loved it! 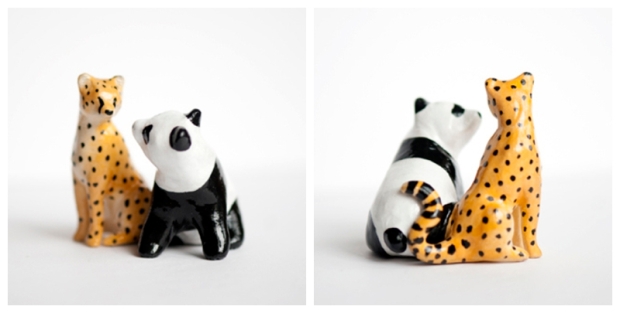