The Power of Constraint 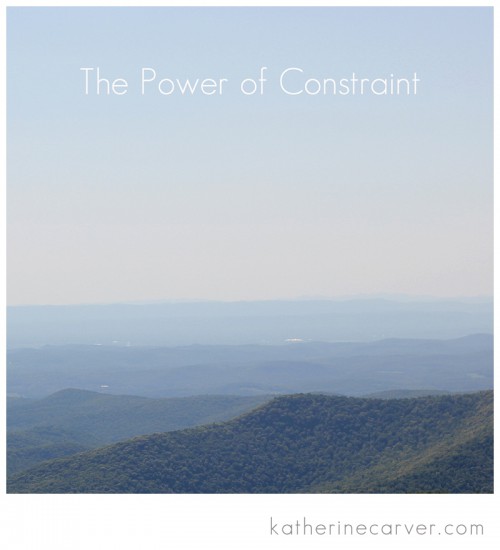 I recently listened to a podcast discussing constraint in relation to creativity, and it got me thinking about how time and resources, for example, impact creation.  This quote by Twyla Tharp sums it up perfectly –“Whom the gods wish to destroy, they give unlimited resources.”

I have often assumed that constraints are limiting, such as having a limited amount of time and limited resources to pursue a project, interest, etc.  However, Whitney Johnson in her new book, Disrupt Yourself, shares how constraints, when it comes to creativity and innovation, can oftentimes help us.  Interestingly, the research shows that too much time can diminish a person’s ability to complete a project.  It also turns out that the fastest growing startups are not those that received funding; the ones that are successful were actually constrained by financial resources.  I found this information very insightful.

We often believe that (non-dire) constraints are a negative, when in fact they are helpful to achieving success.  I have seen this in my own life.  Some of the most well-received blog posts are those that I wrote in the quickest amount of time.  Sometimes, having less time stops one from perfectionistic tendencies and over-thinking too much.  I am currently working on a long-term project, and I wish that I had more time to work on it.  Per the findings above, perhaps if I had endless amounts of time, I would be less effective in completing my project.  However, I have consciously and deliberately set aside time each week to work on my project through its completion.  Otherwise, it is too easy for time to slip by.  I find that making slower incremental progress is much better than making no progress on an endeavor.

I really love this quote by Whitney Johnson, “For the risk averse who are trying to convince themselves to try something new, the trick is not to focus on what will be gained by venturing forth, but to instead focus on what might be lost by standing still.”

From: For Artists
← Victory: Photography Project — 77
Tips: Welcoming and preparing for your new rescue pup! →
No comments yet